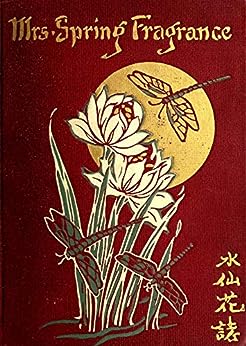 Next door to the Spring Fragrances lived the Chin Yuens. Mrs. Chin Yuen was much older than Mrs. Spring Fragrance; but she had a daughter of eighteen with whom Mrs. Spring Fragrance was on terms of great friendship. The daughter was a pretty girl whose Chinese name was Mai Gwi Far (a rose) and whose American name was Laura. Nearly everybody called her Laura, even her parents and Chinese friends. Laura had a sweetheart, a youth named Kai Tzu. Kai Tzu, who was American-born, and as ruddy and stalwart as any young Westerner, was noted amongst baseball players as one of the finest pitchers on the Coast. He could also sing, “Drink to me only with thine eyes,” to Laura’s piano accompaniment.

Now the only person who knew that Kai Tzu loved Laura and that Laura loved Kai Tzu, was Mrs. Spring Fragrance. The reason for this was that, although the Chin Yuen parents lived in a house furnished in American style, and wore American clothes, yet they religiously observed many Chinese customs, and their ideals of life were the ideals of their Chinese forefathers. Therefore, they had betrothed their daughter, Laura, at the age of fifteen, to the eldest son of the Chinese Government school-teacher in San Francisco. The time for the consummation of the betrothal was approaching.

“I had such a pretty walk today,” said she. “I crossed the banks above the beach and came back by the long road. In the green grass the daffodils were blowing, in the cottage gardens the currant bushes were flowering, and in the air was the perfume of the wallflower. I wished, Laura, that you were with me.”

Laura burst into tears. “That is the walk,” she sobbed, “Kai Tzu and I so love; but never, ah, never, can we take it together again.”

“Now, Little Sister,” comforted Mrs. Spring Fragrance, “you really must not grieve like that. Is there not a beautiful American poem written by a noble American named Tennyson, which says:

“’Tis better to have loved and lost,
Than never to have loved at all?”
Mrs. Spring Fragrance was unaware that Mr. Spring Fragrance, having returned from the city, tired with the day’s business, had thrown himself down on the bamboo settee on the veranda, and that although his eyes were engaged in scanning the pages of the Chinese World, his ears could not help receiving the words which were borne to him through the open window.

There are no reviews yet.

Added to wishlistRemoved from wishlist 0
Add to compare

The Chemistry of Fragrances: From Perfumer to Consumer (ISSN) (English Edition)

Added to wishlistRemoved from wishlist 0
Add to compare
25,90€

Affiliate Disclosure: As an Affiliate Associate, we may earn commissions from qualifying purchases from Amazon.com etc. You can learn more about our editorial and affiliate policy